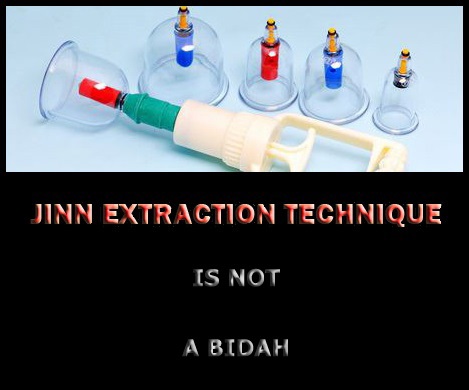 Ruqya treatment for jinn possession, or when we ask Allah to cure us from jinn possession, usually happens or occurs in two ways from our experience: (obviously, there other ways to get cured by Allah that are unknown to us but known to Allah only)

1. killing or destroying the jinn so that they die and disintegrate or dissolve in the patient’s body.

2. khurooj (extraction) of the possessing jinn from the body.

These two forms of ruqya treatment are also applicable to the other spiritual ailments such ayn, sihr and waswaas conditioning.

In the JET treatment we use both forms of ruqya treatment. We ask Allah to kill the jinn when they arrive at the kahil point and we also ask Allah to cause the jinn to exit the body. NO ONE HAS A PROBLEM WITH ACCEPTING THESE TWO RUQYA TREATMENTS.

Now, in order to make things easier for patients, we broke down the khurooj ruqya for the JET process into 3 separate intentions, when in reality they are just one long process intention just like normal khurooj ruqya that most raqis already do.

When you do normal khurooj ruqya, you ask Allah to move the jinn to anywhere in the body (intention 1) and then to cause it to exit (intention 2). Obviously, while the jinn is exiting from a particular point in the body, it is by default, held or trapped in that area of exit so that it can be forced out by the ruqya (intention 3). If that wasn’t the case then the jinn would just go back to their original place, where the initial ruqya moved them from and they would not exit. Since this is the case with the original khurooj ruqya ie that it really has 3 intentions then no one can really complain about me dividing the khurooj ruqya for JET into 3 distinct intentions to help and make things easy for patients.

If you still have a problem with accepting the JET treatment, then I say to you that you shouldn’t even do normal khurooj ruqya to remove the possessing jinn because it has exactly the same ruqya intentions as JET!

RUQYA INTENTIONS DURING JET AREN’T BIDAH OR SHIRK.
With regards to the ruqya intentions during JET treatment:
Ruqya is a worship so “Is there anything WRONG with these ruqya treatment intentions during JET”? NO, there is NOTHING WRONG because they are ALL treatment intentions.
Remember ruqya is ONLY for diagnosis and treatment NOTHING ELSE! It must be beneficial to the patient because of the hadith on ruqya states: “Whoever among you is able to benefit his brother then let him do so” (Al-Albani: Saheeh Jam’i 6019). It must also not contain shirk because of the hadith: “There is nothing wrong with a ruqyah that does not involve shirk.” [Muslim: 5732]. The JET ruqya treatment fufil these two conditions so no one can say that they are a bidah or shirk. The Shariah has NOT written down all the ruqya intentions or duas that we can use but it has laid down conditions such as the two that we have mentioned. This means that we can invent new dua or ruqya provided they follow the rules of the Shariah. Our JET ruqya does NOT go against any of the rules of ruqya, dua or intentions that are in the Shariah such as “no shirk”, “not asking for anything haram” or “not showing off” etc, so it is permissible to do, walhamdulilah!
Any shirk in JET ruqya intentions? = NO!
Any bidah in JET ruqya intentions? = NO!
Any asking for something haram or inappropriate in JET ruqya intentions? = NO!
Are all the JET ruqya intentions for treatment or diagnosis = YES! (In our case all treatment, which is fine).
We have already illustrated the similarities between normal khurooj ruqya and the JET treatment in the previous section. In reality, what I have said in that previous section and what we have said in this section should be enough to prove that JET isn’t a bidah. However, since that might not be enough for some people, let us look carefully at each of the JET ruqya treatment intentions and provide other similar examples, that people can relate to, so that they can see that the intentions are not haram or against the Shariah.

1.Can we ask Allah to move jinn to kahil point via ruqya so that we can use hijama to take them out. Yes, we can, just like asking Allah via ruqya to move phlegm out of the lungs and into the throat so a patient can spit it out. How exactly Allah makes the phlegm expel or move out is not for us to worry about. This is also like khuruj ruqya ie asking Allah to expel jinn from the body and obviously the ruqya will make the jinn move in the body to the place of exit, wherever Allah has chosen that place to be…..ie usually raqis don’t exactly care where that place is and they leave it to Allah but there is no problem in specifying a particular spot such as kahil point ie if Allah can make jinn leave through a foot then Allah can also make jinn leave through the kahil point.

2. Can we ask Allah to trap or hold a jinnee at the kahil point so that we can perform hijama and remove the jinnee. Yes, just as we mentioned above in normal khurooj ruqya the exiting jinnee will be held or trapped by default in a particular point of the body so that it can be pushed out by the ruqya. If that didn’t happen then it would just go back to its original place in the body.

Another example of this, we can ask Allah via ruqya to stop or trap or stop the contents of the appendix from bursting out so we can get a patient to hospital and then get surgery done. Which sane muslim is going to shout ‘bidah’ and stop a parent from making the ruqya intention to cure appendicitis in a child and also at the same time ask Allah via ruqya to keep the contents of appendix trapped until they can get to the hospital because as some of you know if it bursts then the child might die.